OPINION | The Youth Is The Future. Blame Yourself.

OPINION | The Youth Is The Future. Blame Yourself. 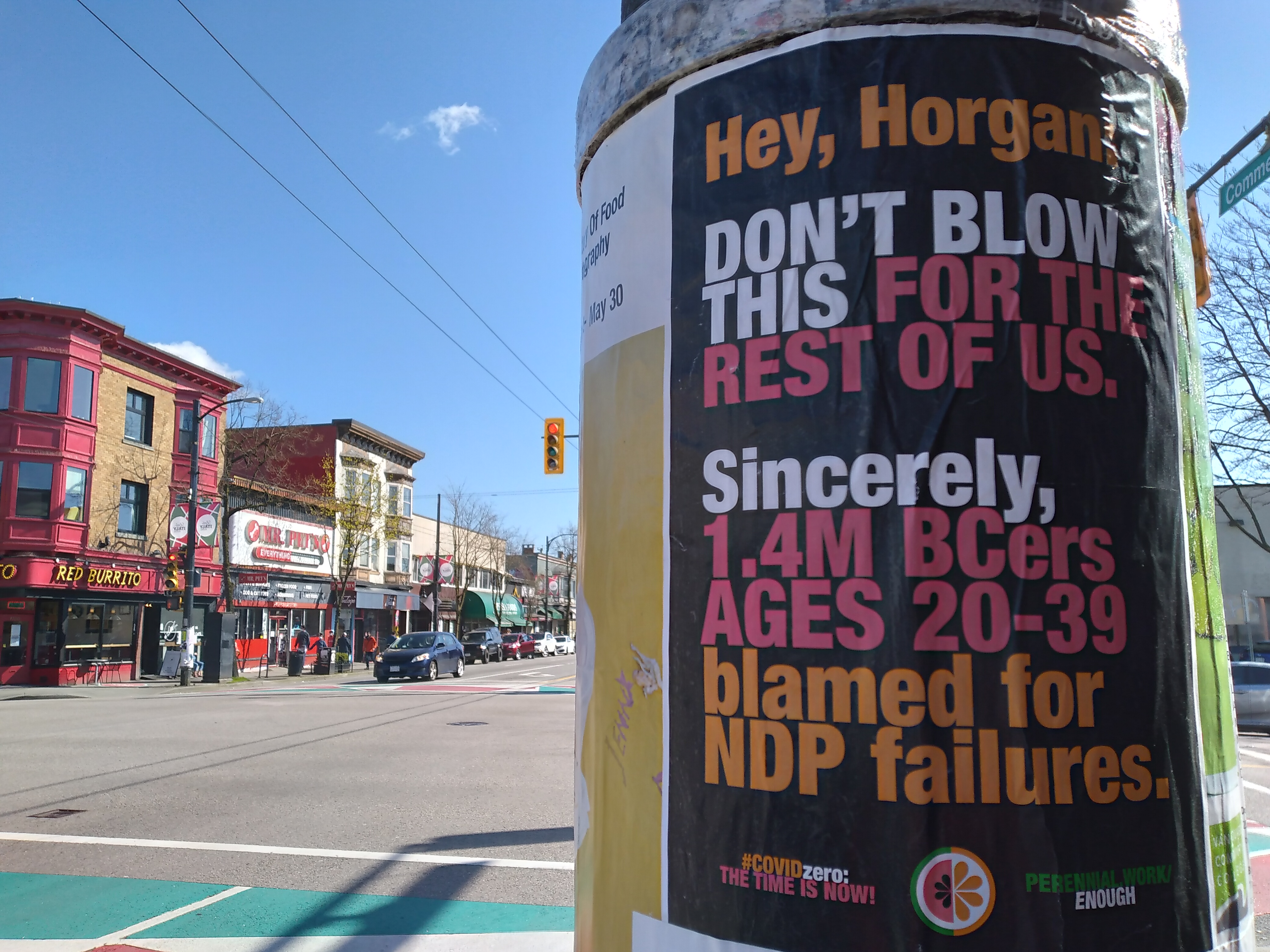 Unceded Territories | The reason John Horgan, BC’s Premier, was “finger-wagging”on a Monday afternoon of March 29 at a press conference while throwing cheap shots and blaming young people was mostly because “young people aren't doing enough,” as a CBC article stated. There are reports too in other provinces which state that 1 in 3 COVID-19 cases involve young people.

"The cohort from 20 to 39 are…quite frankly, putting the rest of us in a challenging position,” Horgan claimed.

Horgan’s cheap-shot statements against 20 to 39 year olds are but of his own ignorance and generalizations of our young. His statement leaves aside the many facts, hard work, struggles, and hope the youth have amidst this pandemic. He leaves aside the young people who are often in the most precarious jobs, are in shared accommodations due to lack of housing, are taking care of their seniors, and who are doing their very best to abide by the quarantine protocols.

As Canada surpassed its 1 million positive cases of COVID-19 this month, BC is struggling with its own surge of COVID-19 cases.

“Don't blow this for the rest of us," said Horgan, CBC reports.

These statements blaming young people in BC are another scapegoat being used by the province for its own failure in containing the deadly coronavirus. In a logical and calculated sense, you cannot blow it if it’s already blown, right?

Looking back to some of BC’s earlier responses to COVID-19, masks protocols became mandatory in indoor public spaces, including grocery, retail, condo and apartment hallways seven months after the lockdown, the CBC reported. In addition, the coronavirus was newspread in December 2019, and the lockdown was only implemented in Canada in March 2020.

However, between December 2019 to March 2020, where were the government agencies, and unions in securing PPE supplies and workplaces for the workers? It was nearly a wipeout of parts of the Canadian population and working class sectors. It was also just in November 2020 that the mandatory 3-layer mask was implemented by Dr. Teresa Tam, Canada’s Chief Public Health Officer, according to the CBC. The 3-layer mask is deemed more effective in terms of face covering protocol, although more research and data is needed to prove this.

Let’s take note that many people have been mobilizing against masks and against the lockdowns, dismissing the COVID-19 public health protocols. Let’s take note that these anti-mask and anti-lockdown supporters have been gathering in large numbers, as well as holding rallies, with no social distancing and no masks. Yet, how many of them faced repercussions for negligence and violation of public health?

Meanwhile, Indigenous, Black, and People of Color (IBPOC) youth have been targets of Canada’s worsening white nationalism, systemic racism, and class division. There are ongoing and unjust arrests against young IBPOC peoples. Reports of police brutality and deaths of IBPOC young people have also been reported and have exposed the brutality of systemic racism, thus the worsening white supremacy embedded within the public and social services as well.

/In January 2021, a young Filipino man in clearly mental health distress was shot and killed by Vancouver Police. His death adds to the list of young people who’ve died at the hands of Canadian police.

Young Blacks are being racially profiled and targeted by the police and even our education system. Such is the case of a young Black man who was tasered and arrested by the RCMP in campus amidst the COVID-19 pandemic, the Daily Hive reported.

Many young people of colour are allies to many peaceful social justice causes but face extensive racism, police brutality and violence. The March 2021 arrest of a young Filipino, an Ethiopian youth, a Black youth and a woman in a wheelchair while with a community of peaceful defenders testifies to the massive police presence and brutality of police arrests, which serve in favour of the pipeline.

21-year old Filipino youth Laurel Fermina was with the community of the peaceful blockade when the brutal arrest happened on Wednesday, March 3rd.

“I was brutalised, arrested, held in a dark and cramped paddywagon while handcuffed and having panic attacks”, Fermina shared in an interview. “Then I was taken to jail where they treated me as per usual - how BIPOC are treated.”

Meanwhile, when a young white man raised his hands in a nazi salute in front of Indigenous land defenders, youth and their allies, and eventually faced no charges – is this a double-standard of the system that supports white nationalism? Since February, white nationalist group Proud Boys has been tried for terrorism charges as they facilitated and took part in the fatal riot in the US Capitol Hill in Janaury 2021. Meanwhile, is this anti-terrorism law in effect when white men in BC raise their hands in a nazi salute and repeatedly yelled racist slurs was let go without repercussion for the white supremacist actions?

TIME TO TALK ABOUT CLIMATE CHANGE & THE YOUTH IS THE FUTURE

The staggering rise of COVID-19 cases can be linked to political decisions, actions, and governments. Adding to the shaming and blaming of our young people by Premier Horgan is the government of BC’s inaction and contribution to the worsening climate change crisis. With the logging of old-growth trees in the province, amidst the pandemic and few months after the wildfire that raged globally, BC prefers to cut its old-growth trees. It is not surprising that massive extraction of resources is happening in BC, as BC’s actions correlate to Horgan’s generational stigma and discrimination, the easy scapegoats for his many failures.

The extraction of resources correlates with the stigmatization of young people. As destruction of natural resources prevail, the young and future generations have to suffer the consequences of today's actions, particularly Canada's inadequate response to the pipelines, LNG, old growth logging and Site C dam projects.

a total of more than 1 million positive tests and over 23,000 deaths. Yesterday, BC reported more than 1,200 new COVID-19 cases for the second consecutive day.

"We need to redouble our efforts, to focus on individual responsibility for the greater good," Horgan added in the March 29 conference.