Advocates Ask “Who’s Next?” After Fatal Police Shooting in Vancouver

Advocates Ask “Who’s Next?” After Fatal Police Shooting in Vancouver 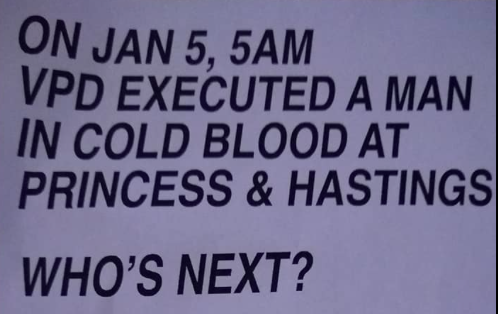 Unceded Territories | A 37-year old man in mental distress was fatally shot by Vancouver Police in the city’s Downtown Eastside (DTES) on January 5, 2021. Police say they had received reports of a man with a sword chasing people at the intersection of Princess Avenue and East Hastings Street, the location of Grace Mansion, a transitional housing facility operated by the Salvation Army.

Members of the Vancouver Area Network of Drug Users (VANDU) are organizing a march and vigil on January 12 in response to the shooting.

According to reporting by the Tyee, the man was unclothed and in clear distress before the police arrived, and he had injured himself running into a glass door. A released video shows him approaching police officers with a long object raised in his hands, at which point the police opened fire. Witnesses have said that the man was yelling, “She doesn’t love me anymore!” and reported hearing three gunshots.

In a Vancouver Police Department media release, spokesperson Tania Visintin said, “Reports came in that this man was chasing people with the weapon and using it in an aggressive and threatening manner.” The release continued, “The man was subsequently shot by police.”

Advocates question why some form of non-lethal intervention was not used. Meenakshi Mannoe, a criminal justice campaigner for Pivot Legal, told the Tyee, “There has to be a better way.” She continued, “Crisis and chaos are not unusual in the Downtown Eastside, it’s something the police should be prepared for if they are responding to calls. You can safely assume that people are experiencing marginalised health, that they’re experiencing mental health issues, that they’re being impacted by unsafe and toxic drug supply.”

A statement from the Vancouver Area Network of Drug Users (VANDU) asks, “with a taser, baton, and pepper spray ... why did officers choose not to use ‘less-than-lethal’ means to disarm the man?” VANDU is a grassroots group that has been active in the community since 1998.

The statement released by the VPD did not identify the 37-year old victim.

VANDU has asked for DTES residents to provide witness accounts of the police shooting, to help identify the victim, and to speak his name. The January 12 vigil and march has been called under the banner of “WHO’S NEXT? DTES Community Vigil for Man Murdered by VPD.” It will begin at 1:30pm at VANDU’s office at 380 East Hastings, a few blocks away from the scene of the fatal police shooting.